It isn’t yesterday any more… 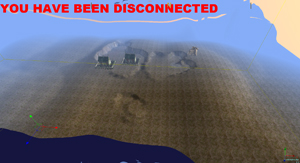 Could have been worse... disconnected while moving a good sized room-

As soon as I began the move I was disconnected. (could be the area, electricity can be wonky up here.) Could have been a lot of things. But the computer is connected to a UPS thingy. Email went down on a laptop. Cathi’s laptop complained to her…

Cathi had to go do stuff while I tried to recover here.

Next three times I tried to log in did not go well, disconnected after a minute the first time, half a minute the second. Didn’t get all the way through the connection message the third. I restarted the computer, I reset the bridge (we have a router with wireless capabilities and 5 computers connected to the network, 4 of them through the bridge.) I tried a different builder character. Nope, still didn’t work. After a while I got characters to load, but he or she couldn’t move. It finally worked. I moved the shoreline south about 160 meters and down I don’t know how far so the water levels lined up, more or less… and ‘built’ a 160 meter by 211 meter room between the highest level (altitude-wise) and the southern shoreline. Then spent hours adjusting terrain and connecting the two rooms. Suffered a couple more disconnections…. had a builder character get weird on me, (he started running around like he was trying to be parallel with the ground.) (I better check on him later to see if he needs to be rejuvenated / re-rolled. (shhh-)

TaleRocker~DreamCat Creations is the heart of the Aerendel Development Team. We'll tell you about the rest of the team when and if they decide to 'go public'.
View all posts by aerendeldev →
This entry was posted in Damage Control, Planning, Progress. Bookmark the permalink.