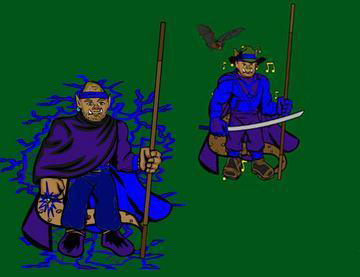 "Ymmpses" Muhdagus wiff pointy head, Rocky in the back with Katana

<— This is an older compilation graphic. It might have been drawn in an online resource called a hero engine or hero generator or something like that. (I’ll have to go back in my time machine to figure that out.)

Yeah, Yesterday got off to a bad start. I tried to fix the look of the front of the cave, where it connects through the mountains up near the buildings at the training grounds. (which I’m now calling the northern part of Shamrock Island.) Things got more and more out of line and looked worse and worse, until I reverted to an earlier saved whatchamacallit. And that wiped out two or three days of work.

I went to bed disgusted and thinking that it might be easier to scrap this island and start over – this isn’t the first time I’ve felt like that. I think I’m going to have to take what is now the southern half of the island and move it to another “Area”. & “Seamlessly” connect them.  I got some decent sleep and woke up worried about the dog, who hadn’t been out to pee in a couple hours. So around 1:30 pm I went downstairs, let the dog out and took another look at the island. And started again.

A major part of trying to ‘build’ a decent looking world is patience. You can’t do anything in a hurry. If you do, it might take you days (Or lots of man-hours) to repair the damage.

So anyway the dog came back in and was sitting on the floor looking glum, keeping his eye on my snack, thinking he should get most if not all of it…

& the real world started bouncing. Almost un-perceivably- I watched the computer bounce up and down like the house was on a trampoline and somebody was bouncing far far away. It wasn’t the dog- he wasn’t moving. He just might be big enough to shake the house… I looked at the time on the computer and it was 1:55 pm.

I was monitoring email and got a message from DreamCat at her day job. I told her I thought I felt an earth quake. She came back about ten minutes later and said, “You were right- ABC news is reporting a 5.8 quake in the Washington D.C. area.”

—When I’d asked in the forum if my island had grown too large for one area, (the properties panels said it was something like 540 by 360 and something I re-read said that 32 x 32 in the properties panel was more like 61 by 61 meters… which would zoom me way over the limit). Nobody’d given me a straight answer, but then somebody told me in the forums that maybe I would be better off splitting the area in two.

I headed back to dreamland, left a couple things disconnected, (bits and pieces of island scattered all around…) and this morning at about 4:30 am; it took for-ever to get in. It took me no time at all to get to where you choose your character, but from there it took like 5 real world minutes to actually get the character anywhere. Don’t know whether that’s because of something on my end or somewhere else.

TaleRocker~DreamCat Creations is the heart of the Aerendel Development Team. We'll tell you about the rest of the team when and if they decide to 'go public'.
View all posts by aerendeldev →
This entry was posted in Damage Control, Progress, Real World Intrusions. Bookmark the permalink.